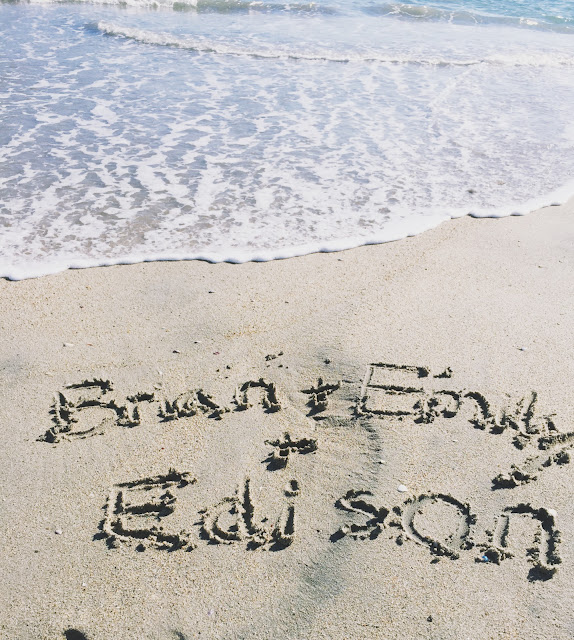 In the first six weeks of his life, Edison went to the doctor eight times. That doesn't count two lab visits for tests. In the same time period, I went to Urgent Care three times and my OB twice, and met with a lactation consultant twice. So, seventeen doctor/lab/consultations? "Crazy" feels like an understatement. For awhile, it seemed like we did little besides go to appointments and the airport. But after two months, we're finally starting to figure out our "new normal."

After the last update I wrote, I planned to go to Urgent Care the next week to get the very itchy rash spreading across my chest checked out. But surprise! I woke up that Friday morning with mastitis a second time. I was surprised to discover that I could actually feel worse than I had before. Brian had gone to work, Edison was crying and needed to be fed, and even though I could barely move, somehow I warmed up a bottle for him and managed to feed him. Both of us were screaming. That was a low point.

While I strapped Edison into his car seat, he smiled for the first time! I cried some happy tears.

Then I realized that I couldn't carry him to the car with one arm. I called a friend from church, and she just happened to be in the area - nothing short of miraculous. She dropped me off at the Urgent Care, took me to Walgreens, and watched Edison all afternoon until Brian got home. She was a lifesaver, and it was truly amazing.

My mother-in-law offered to come back for a week while I recovered, and we gladly accepted the invitation. When I saw the OB that Monday, I was still running a fever! They prescribed me a different antibiotic and an anti-fungal, and assured me that one of the two would take care of the rash.

In the meantime, after meeting with the lactation consultant again, I felt encouraged that things were going better. I breastfeed him the next three feedings, and promptly started bleeding again. So... back to square one there. But I also started eliminating milk products entirely from my diet. All along, I thought that avoiding the products with lactose would be good enough. But the lactation consultant explained that it's milk proteins, stuff like whey, that's the problem, and those are in a lot more than just dairy foods - we're talking anything made with milk or butter. 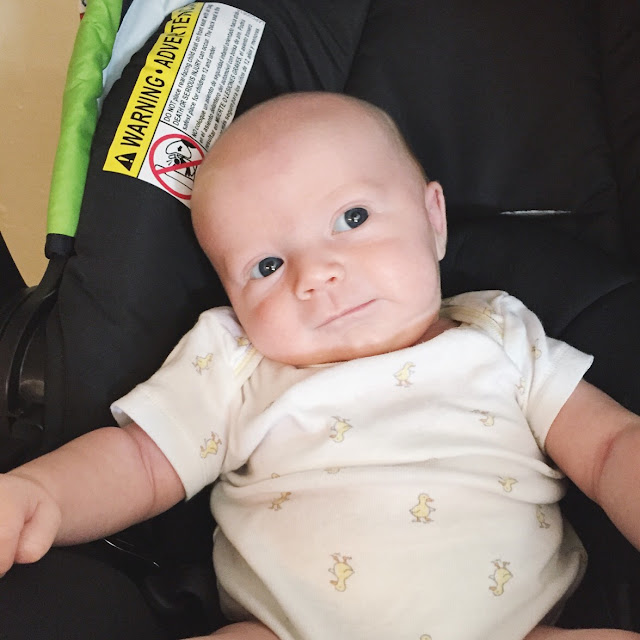 On September 2nd, Edison had the lip-tie procedure. It turned out that he had a position 4 lip-tie that was indenting his gum, about as severe as you could get. Edison barely cried afterwards!


We had contemplated going to California for Labor Day, but we knew we'd have to leave on the same day as Edison's lip-tie release, and I was still recovering from mastitis. Plus, we hadn't taken him anywhere besides the doctor and airport to pick up and drop off family. But then, I figured that if we were going to be miserable, we might as well be miserable in California, where there's an ocean. Right?

So we went. It wasn't easy, but I'm really glad we did it. We needed the escape! 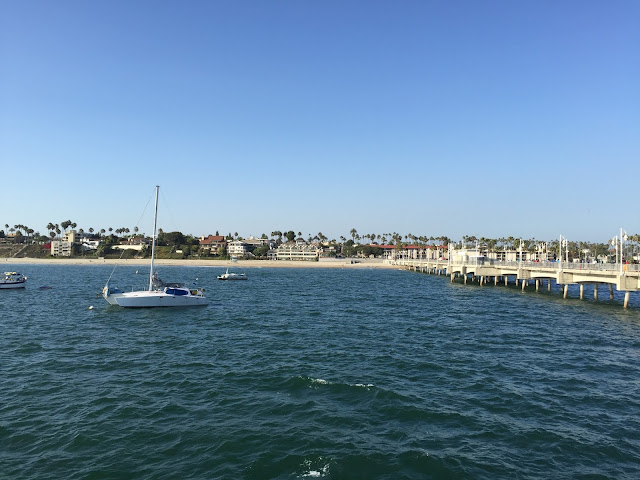 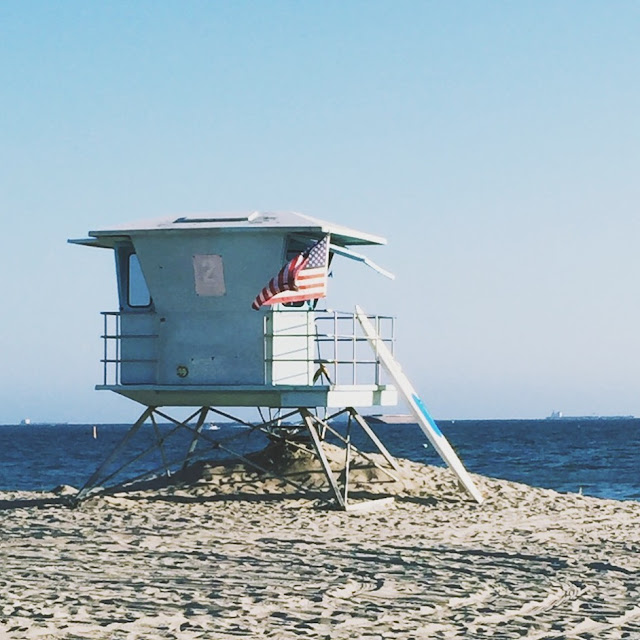 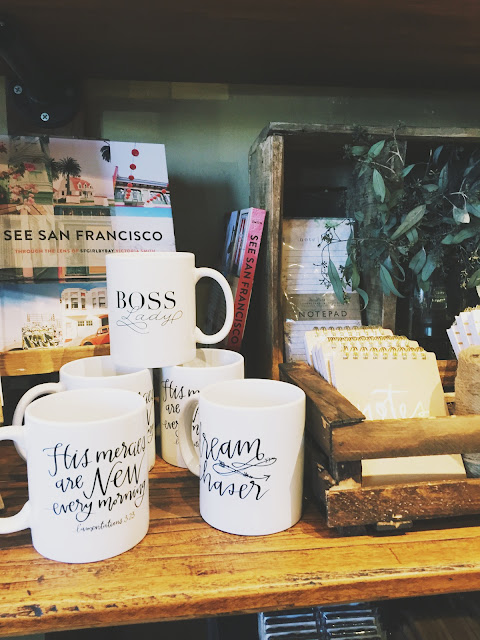 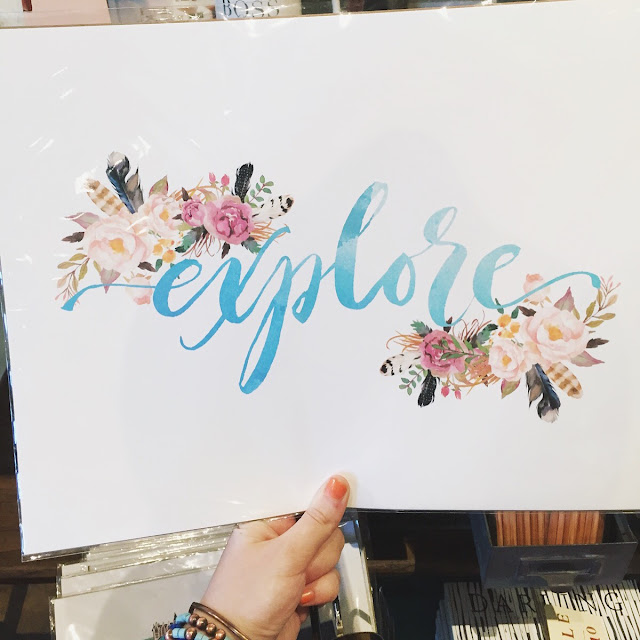 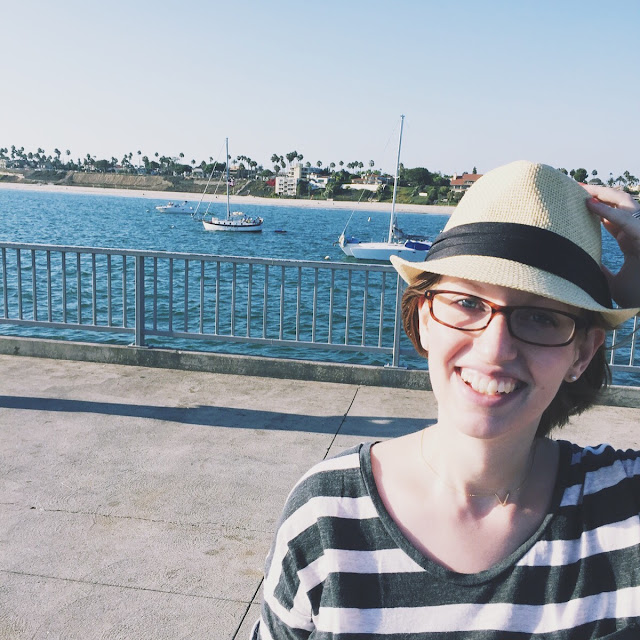 The next week, I saw a family practice doctor about the rash, and he thought it looked like hives since it had migrated to my elbows and thighs, and gave me two antihistamines to take.They didn't seem to help much, but going to the doctor again was the last thing I wanted to do.

The 13th was Edison's first Sunday at church! And also the last time he'll be able to fit in his bow tie onesie, these pants, and these shoes that he wore for the first time that day. That's what happens when you don't get out much. 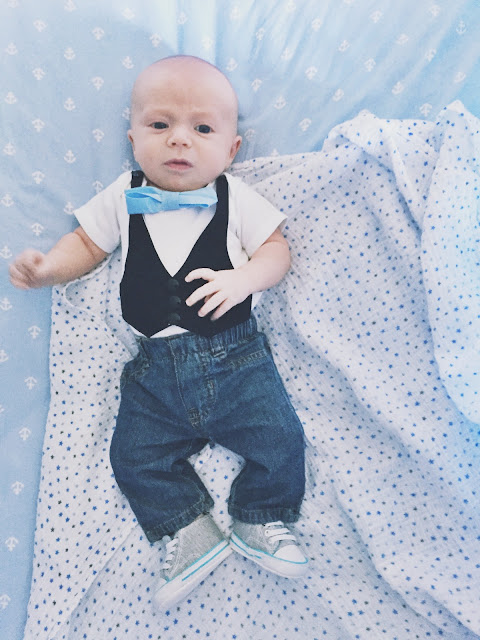 We had that week all to ourselves. Then my sister, brother-in-law, niece and nephew came to visit. Up to this point, that one smile on the day I had to go to Urgent Care was really the only one I'd seen. Then when these guys walked through the door, he immediately gave them a big smile! He really turned on the charm for them - smiles and giggles all week long!

My niece and nephew were so excited to meet their cousin. He's so loved. 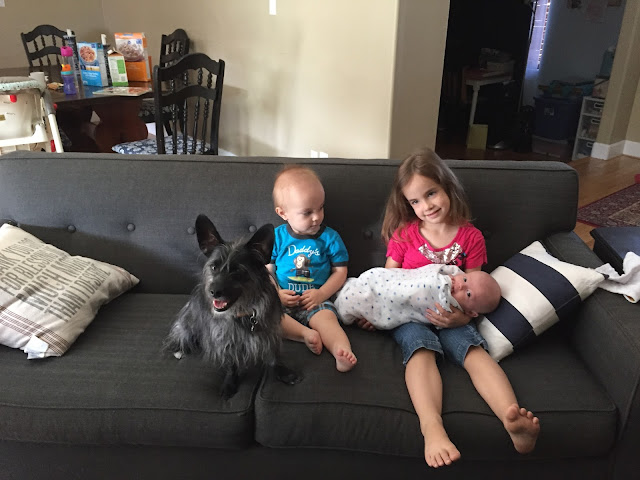 We went to the playground, spent time in the pool, drew countless pictures, visited an arts and innovation children's museum, and the splash pad and playgrounds at Riverview Mesa. I'm already anticipating when Edison will be old enough to enjoy it!

He did like getting some pool time, even though it always wore him out. 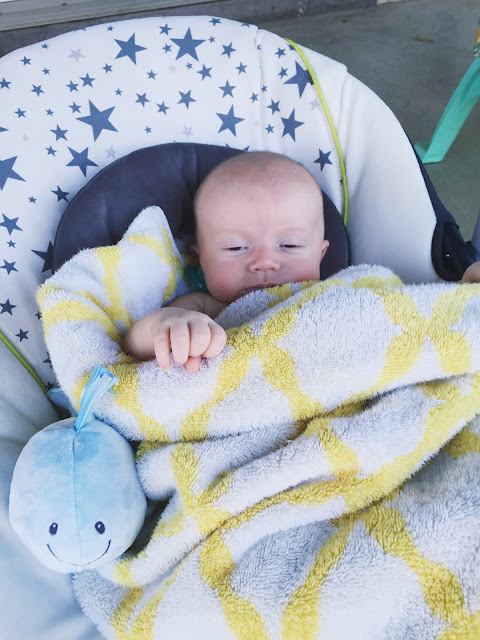 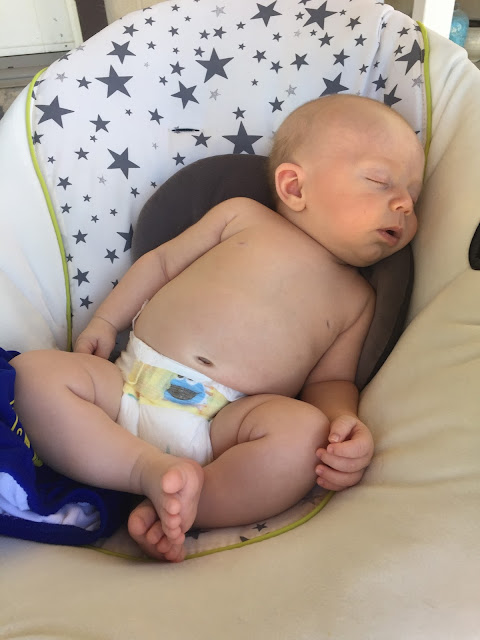 "Arizona is so fun!" my niece said several times. I asked her the morning they left what was the most fun, between all the things we did that week. She answered without missing a beat: "Playing with Edison!" 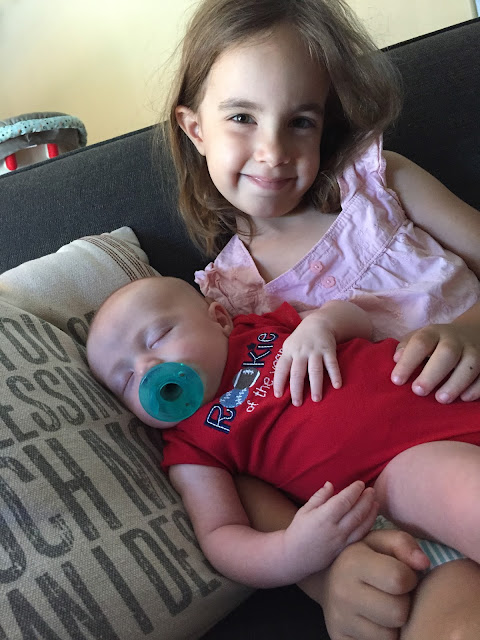 On Sunday, Edison and I cheered on daddy as he swam/biked/ran his first Olympic distance triathlon! 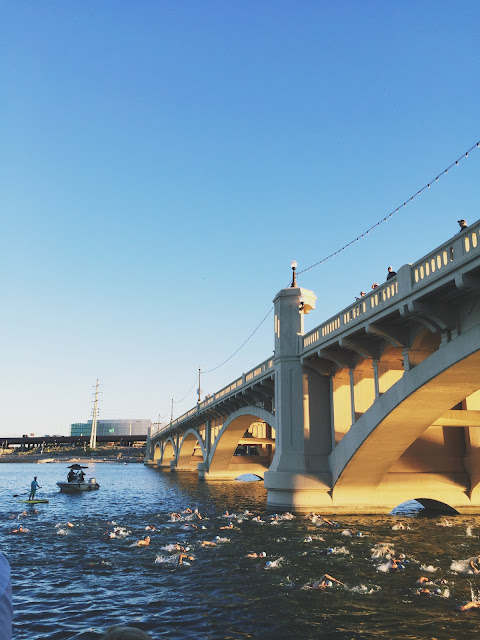 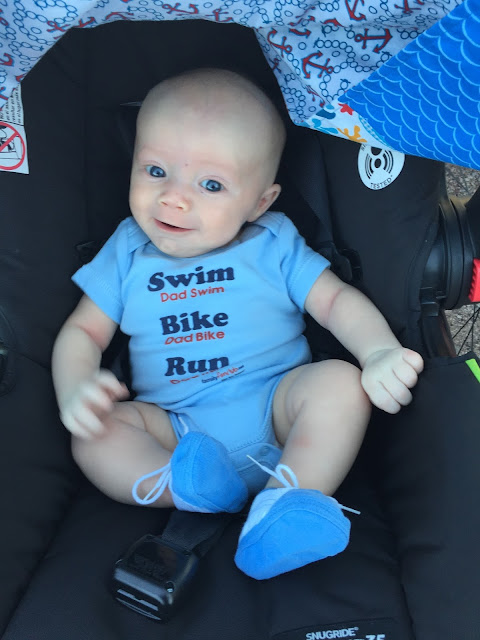 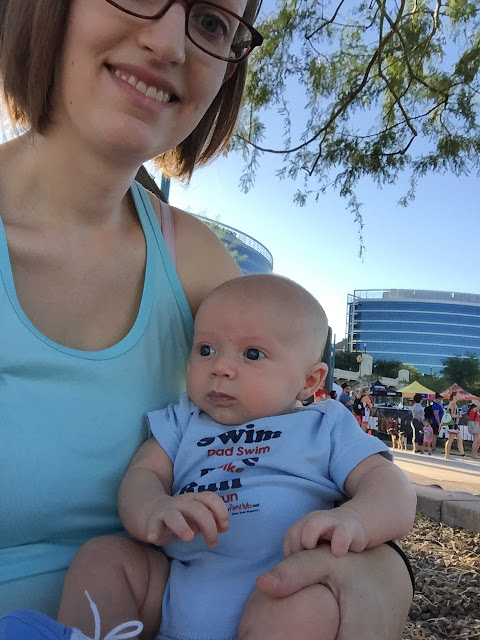 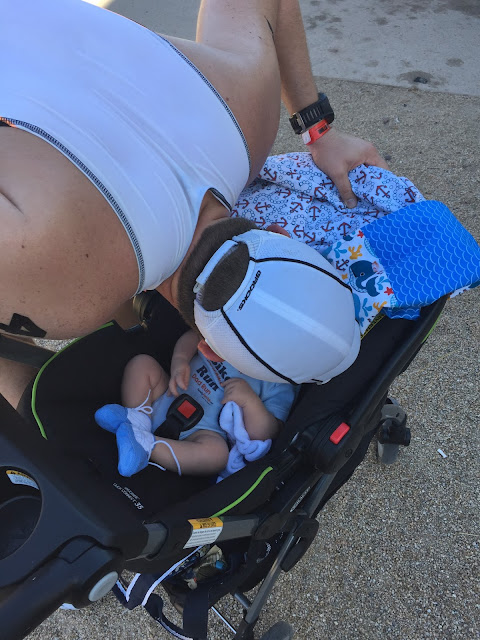 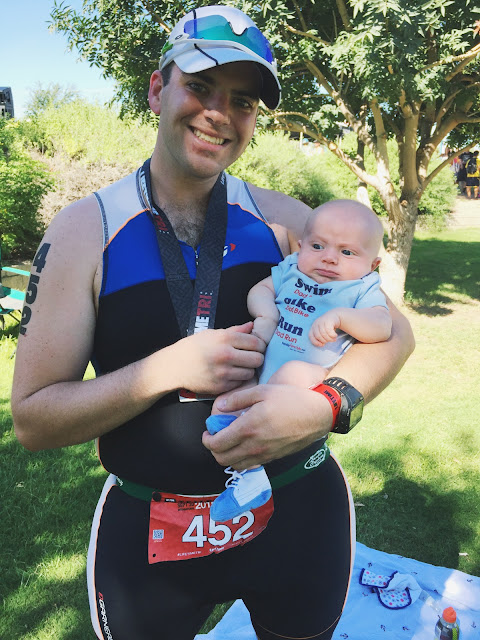 The next day, our little man turned two months old!!! 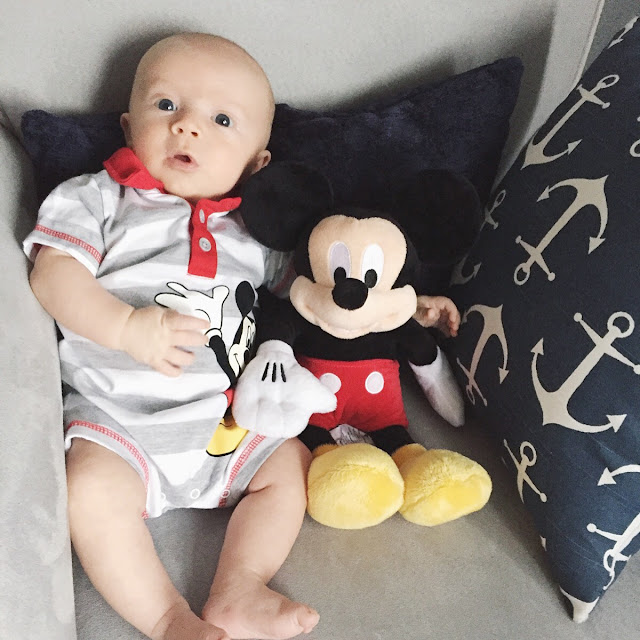 This month, he's started looking at people's faces, and just last week, smiling and laughing in earnest. When he looks at you and smiles, it's the most wonderful feeling! Everyone said it would melt my heart, and you guys were right. 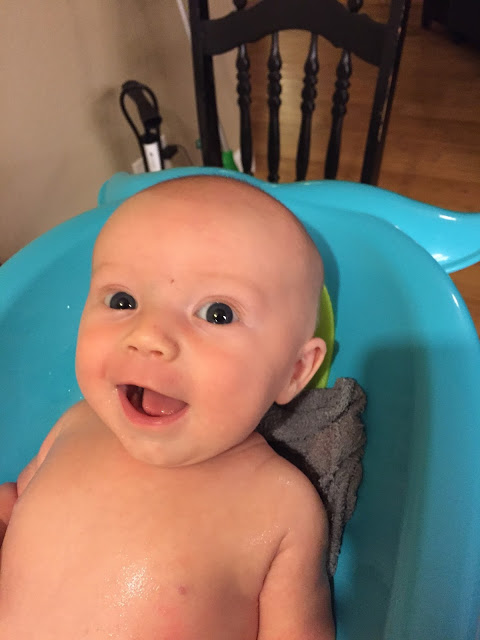 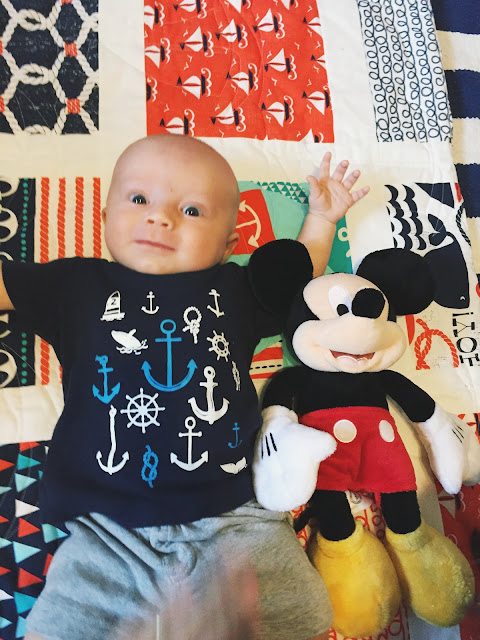 His new favorite thing is playing "the running game," when someone holds his feet and moves them back and forth as if he's running, and his play gym. He still doesn't like changing clothes, or taking his reflux medicine.

But, we ran out of it the weekend before his appointment, and guess what - he didn't seem any worse. Then to celebrate Brian's race, I ate some buttermilk pancakes, and the next day he had a rough time. so (unfortunately for me) the milk elimination diet might be working! Or, it could be that he's just growing out of it (which would be great, because I'm seriously craving chocolate, macaroni and cheese, and cupcakes. And don't even talk about pizza, I might cry).

In other good news, my mystery hives seem to be finally going away. You know, I think all along they might have been stress-hives. It's not like I haven't had any of that in the last two months!

But it finally feels like we're figuring out our "new normal," as someone told us we would. There's still times I feel at a loss as a mom, and there's still mountains ahead to climb in the near future. But today, it's nice to rest, and catch my breath.