I don't care much about clothes. I'm not a super girly girl. I prize comfort over style. I'm fine with a simple uniform of a nice fitted tee layered over a coordinating tank top, boot cut jeans, and cute flats.

At least, that's what I always thought. Then, I actually decided to count my clothes.

I almost had a conniption.* For someone who claims not to care much about clothes, my closet tells quite another story. In fact, it loudly screams "LIAR LIAR PANTS ON FIRE!" 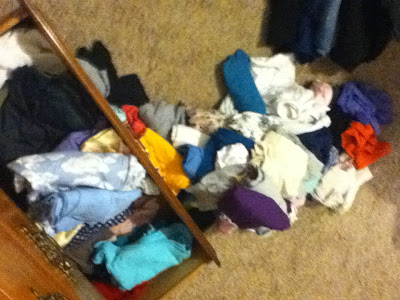 That's AFTER taking two garbage bag loads to Goodwill. And that number doesn't even include my underwear and sock drawer, which is crammed to bursting.


Where your treasure is, there your heart will be also.
-Matthew 6:21

So I've been saying, "I can't help those people because I don't have a lot of money," while investing $7,080 in my closet. Something is wrong with this picture. So I'm wearing only ten items this month because:
But that's only half the story of why I'm wearing ten clothing items this month.

After hearing two sermons back to back on James 1:27, "Religion that God our Father accepts as pure and faultless is this: to look after orphans and widows...". I think of orphans and widows as being those who are most vulnerable in our society. I used to assume I was neutral towards them,  but then I asked myself the hard question: Am I participating in the exploitation of children when I shop at stores that oppress them by using child labor and forced labor?

Because Biblically, that's a big deal.


I was pretty much terrified to look into it, afraid of what I might find, afraid of having to change, and really, afraid of the inconvenience the truth might create. Buying indiscriminately was so easy. However, laziness and complacency don’t mesh well with true religion, and in the end, my desire to love like Jesus is winning out.

I’m so glad that I’ve taken the time to educate myself about the issues, because what I’ve found is that it’s not nearly as hard as I thought to make a difference.

This month, I'm doing a different sort of fashion series. I'm blogging 31 Days of Fashion for Freedom. The goal is to raise awareness for human trafficking and encourage others to change the way they shop by providing information, resources, and practical ways to make a difference, followed by a charity auction of my clothes AND giveaways from several ethical clothing companies.


Notice the stress on "practical." Because you know what the research I've done on ethical fashion has shown me? It's not that hard to make a difference.

Are you excited yet?! I'm bursting at the seams to begin! But first, I need to make you a promise.

I promise this is not going to be a big guilt trip. Although guilt can be a powerful weapon, its results aren't long term. Plus, there's no point in guilt tripping you, when I'm every bit as much of a mess (or more so!) than you are.


“At the end of life we will not be judged by how many diplomas we have received, how much money we have made, how many great things we have done.We will be judged by "I was hungry, and you gave me something to eat, I was naked and you clothed me. I was homeless, and you took me in.” ― Mother Teresa

“The King will reply, ‘Truly I tell you, whatever you did for one of the least of these brothers and sisters of mine, you did for me.’ -Jesus

Will you join me for 31 Days of Fashion for Freedom?

*This word does not mean what I thought it meant. Its not "heart attack," but apparently, a fit of emotion?! Who knew?

2. Modern Slavery and How to Fight It
3. What is Ethical Fashion?
4. What I'm Wearing This Month
5. When it Clicked for Me
6. Packing Light

Week 2: Take Action
1. What's in Your Closet? {vlog}
2. How Many Slaves Work For You?
3. The Fair Trade Difference

4. Fight Slavery? There's an App For That
5. Style Made With Love, and Fighting Trafficking With Lipsticks

Week 3: Where to Shop
1. An Update, and The 10th Item Reveal!
2. 25 Unique Ways to Wear A Scarf
3. Getting to Know an Everyday Activist: Whitney Ray
4. Six Ways to Find Out if A Product is Ethically Made
5. Where to Buy Casual Ethical Clothing

Week 5: Finale
1. Ethical Fashion Giveaway and Charity Auction
2. One Month and Ten Items Later
3. Where Do We Go From Here?