Decluttering and Organizing the Bathrooms

This picture is  almost my dream bathroom. I'm not a fan of the windows, haha. But, tub-check, especially if it's a clawfoot one. Glass shower -check. Dark wood-looking floors -check. Light blue and white colorscheme- check.

But, until we own our own house and have enough money for a bathroom makeover, here's what we've got: 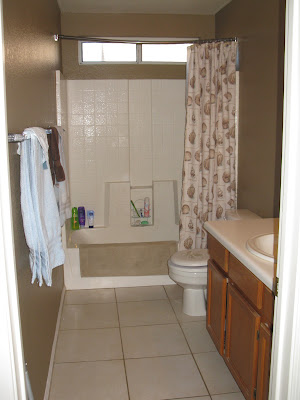 Not bad, eh? We painted the walls brown, and our light blue towels and sea shell stuff matches really well. It matches especially well with the light blue bedroom it's attached too.


For the Organized Simplicity 10 Day challenge, I started in the hall bathroom. We haven't done any remodeling in here. 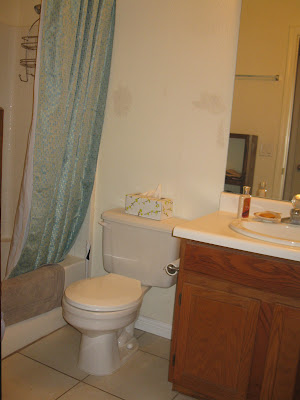 Tsh Oxenreider suggests writing down a few words you'd like to describe your bathroom when you're finished. For the master bathroom, I wanted a beach-spa-retreat feeling. Since our hall bathroom is used mainly by guests, I wanted it to be clean first and foremost, and functional, meaning it had everything in it a guest might need.

As Tsh says in the book, the bathroom can be a clutter magnet, all those hotel bottles, cosmetics, and products. When I first did this deep clean last fall, I had a little basket filled with lotions, hotel shampoo and conditioner, extra soap, and bubble bath on top of the shelf that holds towels. I narrowed my extra toiletries down to the ones shown in this picture: But after several months and a few overnight visitors, I realized that no one was using them, and I would really rather have the bubble bath in our bathroom, where I actually take bubble baths. I only needed one bottle in there, so I put the rest of the items in the linen closet with the other extra toiletries.

Upon further reflection, I think I'll actually get rid of those hotel samples. I can't really add them to my yard sale basket, but homeless shelters always need them, so I should add them to my "give" box.

Do you have a lot of cosmetics and toiletries cluttering up your bathroom? Try one of the following:


Next I tackled the towels. We have a lot of towels, the shelf in the bathroom was always bulging and overflowing with them. I had them folded and stacked, but they were too big to fit well on the shelf. Last fall I decided to try rolling them up to see if they would fit better. 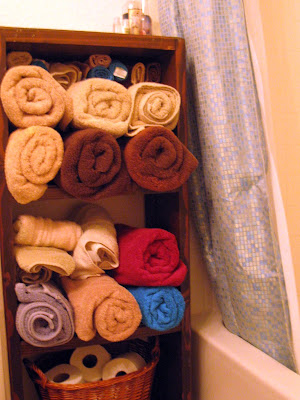 It was still too crowded for my taste. I could get rid of some, but towels are expensive, and when we have people over, we really do use them. And since I usually run a load of towels every two weeks, we need at least two sets available. After I organized the linen closet, which I'll discuss in an upcoming post, I found I had lots of room for some extra towels.
After: 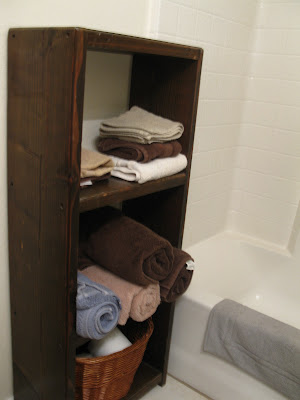 After all the decluttering, I was ready to clean the countertop, mirror, toilet, floor, and put some elbow grease into getting the tub nice and shiny.

Since "clean" was one of the outcomes I wanted for this bathroom, I decided I'd make it easier to spruce it up before guests came by keeping the bathroom cleaning products under the sink. 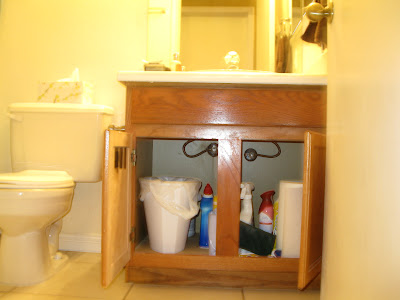 I realized that I'd been using my seashell shaped soap dish in the master bathroom just because it matched the tooth brush holder, but we used liquid soap in there, and bar soap in the hall bathroom. 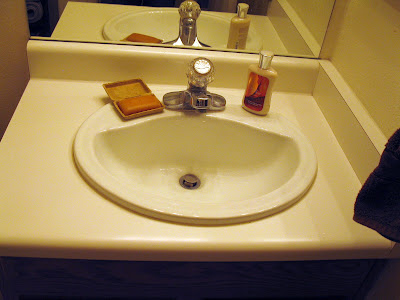 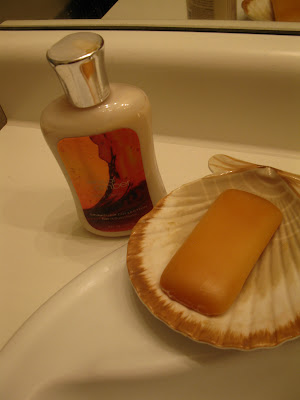 Next, I tackled the master bathroom. The de-cluttering stage was much more intense in this bathroom. 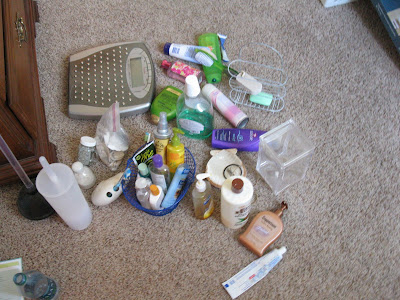 That's just the stuff from the countertop, floor, and tub. When I added my makeup drawer and the cupboards underneath to the mix, I was impressed that we somehow managed to fit all that stuff in there.

While I sorted my cosmetics and products, I washed my make up brushes and tools in hot water with a little dishsoap, and laid them out to dry. 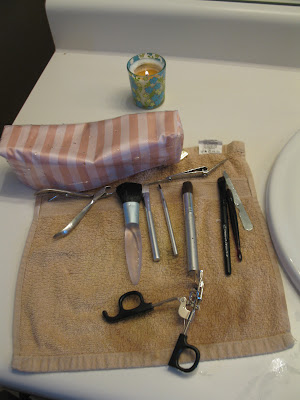 Do you know how long to keep make up products? I used Tsh's list on page 161 to narrow down mine:
I threw out tubes of lipstick from high school, old mascara, liquid eyeliner, and several eyeshadows. I had so much more room in my makeup drawer afterwards! 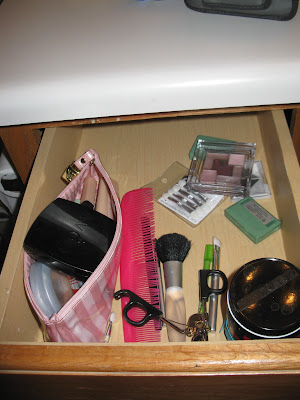 Now, onto the disaster below the sink. 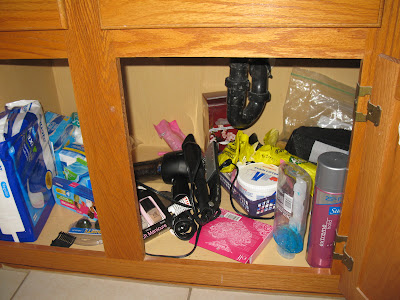 I did throw out some products, but most of items just needed to be organized. I bought two white plastic bins, and problem solved! 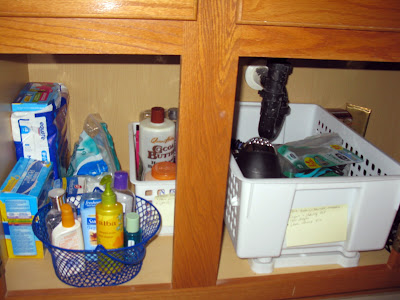 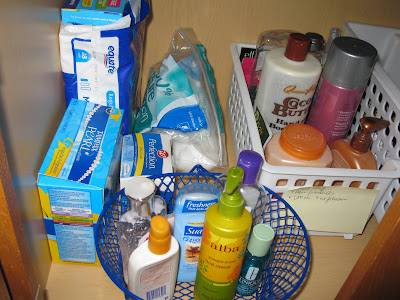 Yes, I labeled the bins with sticky notes, and yes, they came off in a couple days. Next time I'll use real labels!Keeping the microfiber cloths under the sink makes it easier to do a quick wipe down of the bathroom. 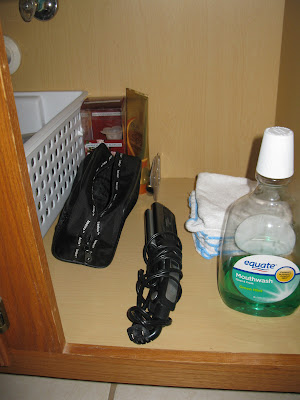 There was one drawer that went untouched: Brian's stuff. The only things of Brian's I missed with were three mostly empty bottles of AXE body spray, and he gave me permission to throw them away since he hadn't worn the stuff since back in the day when he "was trying to pick up chicks." 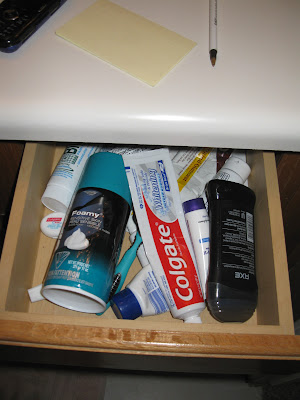 I used the recipe for homemade cleaning products from the back of the book to clean the bathroom. Basically, a combination of baking soda, vinegar, and water will clean almost anything. The nice thing about the all-purpose cleaner I used in the bathroom was that the combination of vinegar and baking soda made still made it foam! Foaming bathroom cleaners are my favorite. And carpet cleaners too. Gotta love it. 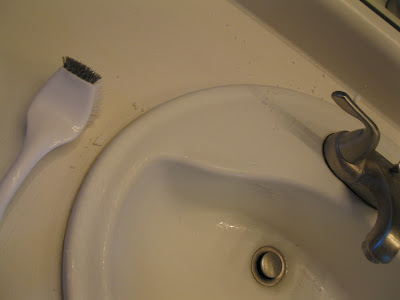 Before this point, my shell collection was displayed on the counter in a plastic ziplock bag. I used an empty glass jar from the pantry to hold the shells. Much better! 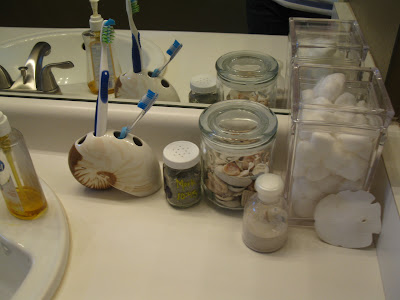 One final touch remained to complete the bathroom. Hanging something on that blank wall above the towel bars. I traced the objects I wanted to hang onto newspaper and taped the newspaper cutouts to the wall to mess with the arrangement. 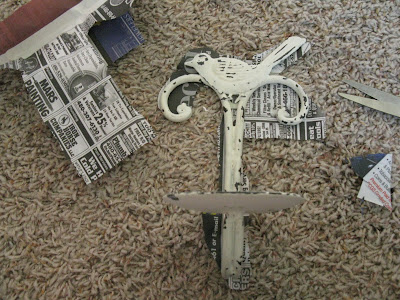 When I finally got it right, I had Brian hang up the pictures. I can't hang a picture straight to save my life. Here's the finished result: 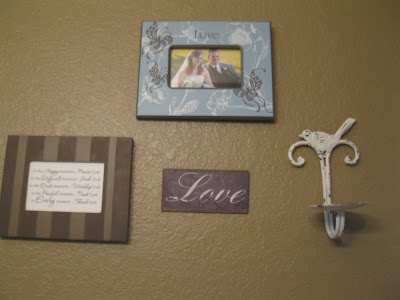 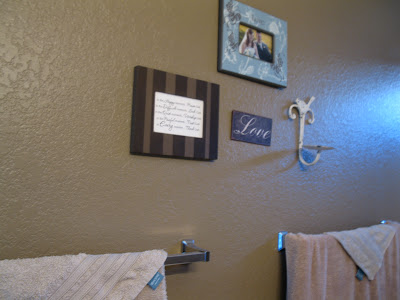 And there you have it! Our bathroom purge is complete.

What "feel" would you like your bathroom to have? What's keeping it from being the way you'd like it to be?