I've had a lot of catching up to do this week, but finally, a week since my last post, here's my first ever trip to California! Brace yourself for lots of pictures!
We had an amazing vacation on Labor Day weekend! We both needed a break from our hectic work/school/sleep schedules. I only missed my computer a little bit, there was so much to see and do! And even then, it was just because I wished I could write about it right away and see what all my blogging friends were up to. I loved seeing tall trees, grass in everyone's yards, and water. Everyone had roses in their yards, and on the street medians, and outside of restaurants. The weather was perfect; every time we walked outside Brian and I breathed a sigh of relief and commented on how cool it felt. I actually wore a light sweater and jeans for the first time in three months!

We were very thankful Brian only had a half day at work. Even at 1:30 p.m. traffic was already heavy in Phoenix. Soon we were on the open road, heading toward the ocean.

We didn't talk much during the six hours there. It was hot in the car, even with the AC, since the sun beat on us through the windows. We also neglected to bring any water...just mountain dew and cream soda. As refreshing as soda may be, when you're sizzling under glass and on hot leather for six hours, it just doesn't cut it. On the bright side, we didn't have to stop to use the restroom ever. When we did stop for dinner at Palm Springs, we got two huge cups of water and rehydrated. 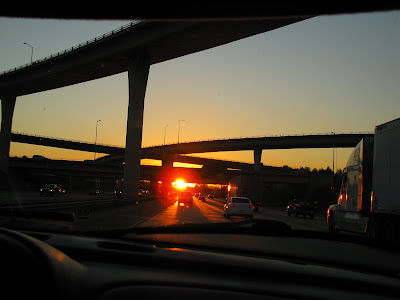 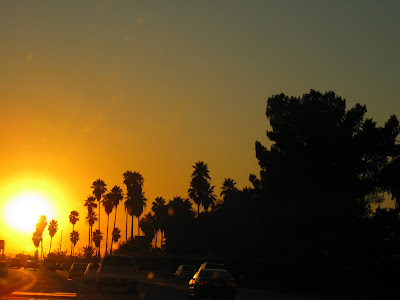 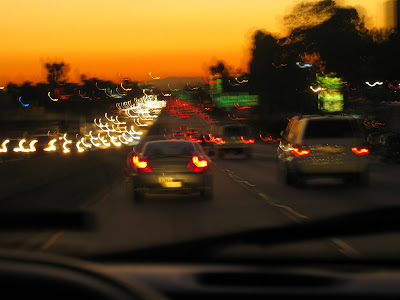 We arrived at my sister-in-law's at 8 p.m, and after the tour of the beautiful house she shares with three other girls,  we and her housemate Natalie all went to Yogurt Land. I love frozen yogurt places, I'd never been to one until we moved to Phoenix! It was delicious and as healthy as you make it. As we were eating, the ocean came up in the conversation, and I realized that we were really just a few minutes away. My excitement could hardly be contained, after we devoured our yogurt we headed to the pier on Seal Beach. Oh, the salty spray! The threnody of the waves! The cries of the seagulls! I have missed the ocean, and I didn't realize it until I was there again.

Saturday we had breakfast at Mimi's Cafe. The pictures speak for themselves! Mmmmmhmmmm.

Then we headed to the beach, where we stayed all afternoon. Like, 5 hours or more. It was awesome, but we were without sunscreen, and with baby oil. FYI, that's a bad idea. I got the worst sunburn in my entire life. Andrea and I burned on our backs and the backs of our legs, and Brian got it really bad on his stomach and face. Sitting, wearing a bra or jeans, and sleeping all became very difficult. With lots of solarcaine spray and aloe vera gel we survived. 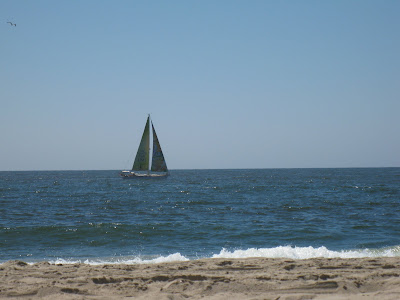 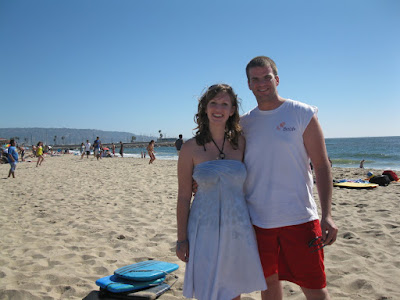 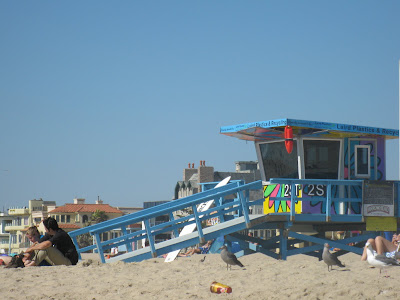 We did swim in the ocean too, even though it was freezing. We just had to wait until we were numb on our legs up to our knees, then our waists, then our necks, and then we had to wait for a lull in the waves and swim past where they were breaking. 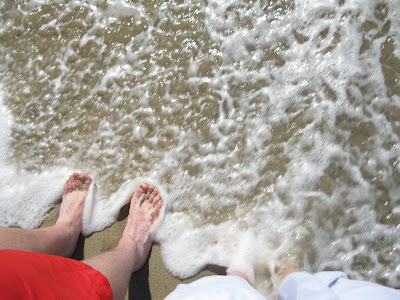 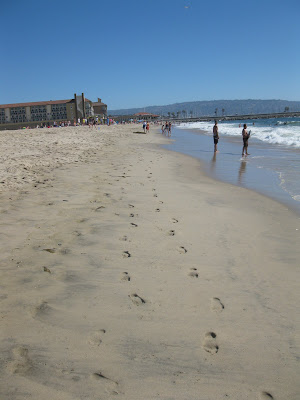 That evening, after treating our sunburns, we went to Downtown Disney. It was magical, even though it wasn't the actual park. The sounds of live music: Spanish, jazz, and classic mixes; swarms of people milling about, glowing store windows, and the smell of caramel popcorn.

We had a hard time choosing a restaurant, they all looked good and were expensive, but we decided on the Jazz Kitchen, which was really good. The decor was fancy and funky, tying in Jazz and musical instruments and notes with the Louisiana swamp in Princess and the Frog style while still being upscale. We went to the "California" letters and Brian and I were going to get our picture taken by the big "C" but I forgot my camera. So, I have no pictures of Downtown Disney, which means I'll just have to go back sometime! I used my birthday present from Andrea, a Disney gift card, on a pair of really cute aqua sandals at the Disney store. We got to see some of the Disney fireworks too, which were really cool. I can't wait to go back someday when we can get passes!
Sunday we went to church with Andrea in the morning, and In and Out for lunch. We watched "The Nightmare Before Christmas" because I'd never seen it before. It was different, much more Tim Burton than typical Disney. We were happy to help her hang up some curtains and pictures and wall stuff in her room; she was such huge help with the unpacking when we moved.
That evening we went to Hollywood. We had dinner at the California Pizza Kitchen, another amazing restaurant where I'd never been, and we used a mystery coupon that took 50% off of the total bill! That was the best barbecue Hawaiian pizza ever. The plaza area was really neat. 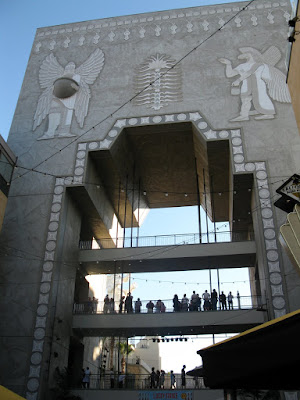 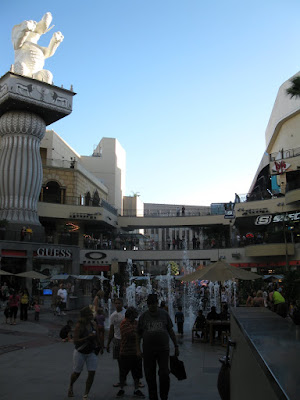 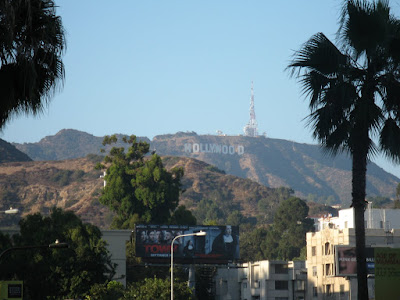 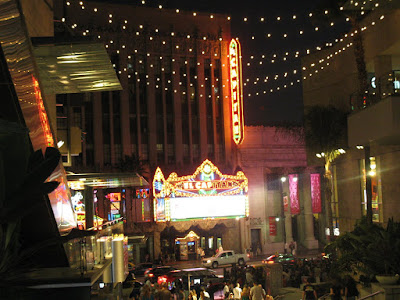 We walked over to the Chinese Theater and saw the hand prints, footprints, and signatures of famous actors, actresses, and directors in the cement. I took far too many pictures to share here, but here's a few of my favorites.
Monday morning, Brian and I were finally able to sleep in! I did enjoy waking up at 8 a.m the two days prior, with the sunlight streaming in and the neighborhood noises and cool, almost chilly, breezes coming through the open window. But on Monday, we didn't have any plans other than brunch at Schooner or Later. We bought coffee as we waited to be seated, and sipped it while watching the morning mist lift from the harbor.The food was delicious again, and after we ate we walked along the wharf a little, and I took more pictures! Last ones, I promise. 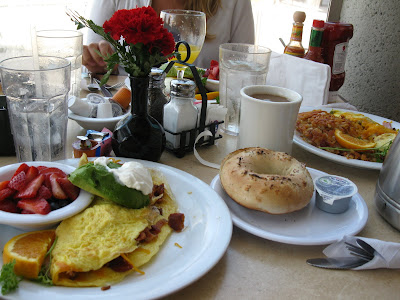 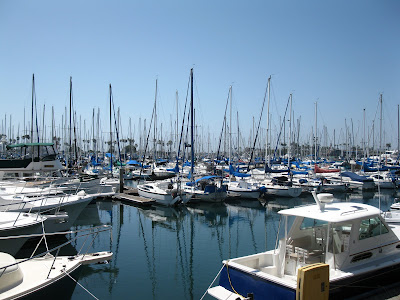 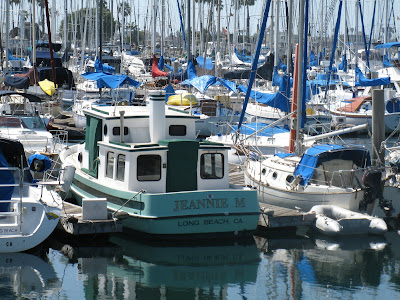 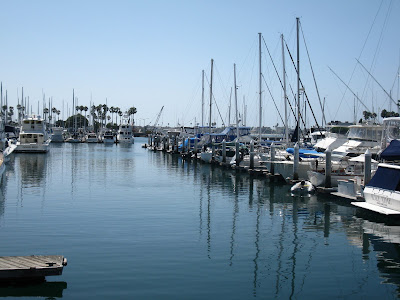 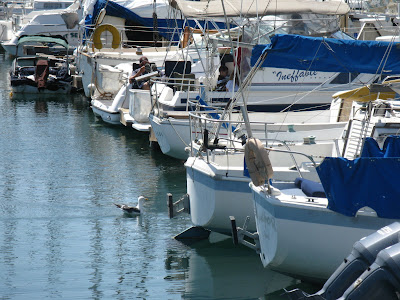 I saved the best pictures for last :)
Anyway, now that I've finally got all that off my chest, LA gave me lots of food for thought and ideas to write about, so the next few posts will probably reference this one. I already miss California and my sister-in-law.
But, it's back to school and work, grocery shopping, housecleaning, laundry...sigh. Ad despite the lathering on of lotions, my sunburn is peeling. But, I do have the most awesome California tan!